I was born into a Christian family. My grandparents were orthodox Christians.

My mother and father had a love marriage. When I was a child, I didn’t understand much but as I grew up, I realized things between them were not good.

There was no peace between my parents. They fought all the time.

My father spent a lot of time with his friends, would come home very late at night. I remember that I was beaten every single day.

My father and mother would fight, and he would end up hitting her. My turn would follow.

I remember the many times my father came home past midnight, and sometimes my mother would ask why he was late.

That one question would be enough. He would beat her. It was unbearable to watch.

If I wasn’t awake already, he would wake me up and make me recite math tables.

Yet, we would go to church every single Sunday.

All week we would get beaten, and on Sunday morning we would head to church.

During service, we had to sit in absolute silence for over 3 hours. By the time it was Sunday evening, my father would resume his treatment of us.

I can still remember my mother’s cheeks swollen, and blood dripping from her split lips.

My dad hated my mother’s side of the family. He had forbidden us going to his in-laws’ house.

Yet, we would sometimes hide our faces and go, so that no one would recognize us and tell him.

My mother even tried to kill herself a couple of times.

When I was 7, I remember walking into a room and seeing my mother standing on a stool, putting her head through a noose that she had made out her saree, almost ready to hang herself.

Even though I didn’t understand what was happening, I was still shattered by what I saw. I quickly grabbed my 4 year old brother and brought him into the room. We both stared at her in silence, not comprehending the situation, but knowing that it was very wrong.

She broke down weeping and climbed down.

Every day was a nightmare.

Back then, we were also very poor.

We didn’t get the opportunity to wear new clothes on Christmas. If I saw my cousins wearing new clothes and mentioned it in front of my father, I would get beaten.

I lived in constant fear of my father.

We were forced to smile through it all.

I’d ask my mum why my father behaved the way he did. And she would answer by saying, “Let’s pray for him.”

There were many night when he would come home late at night, wake my mother up from her sleep, and make her massage his feet for hours so that he could fall asleep.

But even through the darkness, God was answering our prayers.

My father came across some talks by a preacher from Chennai, and he started listening to them.

Slowly, over time, we began to notice changes within him.

He stopped going out with his friends. Instead, he would listen to the talks and write them down.

Finally, there came a day that I will cherish forever.

On the first Sunday of the month, which was also Communion Sunday at church, we were all at home, dressed in white.

We were listening to a song on our tape recorder, which was not common thing for us to be doing.

My father walked into the room, called us all together, and began to weep.

And for the first time since I’ve known him, he said, “Sorry.”

He asked my mother to forgive him  for all the times he had mistreated and abused her.

He then apologized to me.

We all wept, but it was a different kind of weeping than what we were used to.

And then we did what we had never done together before – we danced.

Things changed from that day on. He started speaking to my mother respectfully. He used to hate his in-laws, but now, all of us spend more time in their house than in ours.

Today, my dad is a pastor.

I don’t know how it happened, but I do know this – God answers prayers, and He answers them in His time.

I could never look my father in the eye, but now I sit on him and even tickle him, and share everything with him.

I love my father very much, and I am grateful for him.

And I love my mother for the hope and faith she held on to through the years. She refused to give up on her family, and if it wasn’t for her and her prayers, we would not have been where we are today – together.

There are days when my father still gets up in the pulpit and publicly apologizes to us, his family, for all the things he had done.

Things that were impossible became a reality for us.

God filled us with joy, while we cried to him in our deepest pain.

He hears. And He really does have a purpose for us all.

Here’s a cover of Matt Redman’s song, ‘The Father’s Song’. We pray it blesses you.
A shoutout to the vocalist, Sushmita Majumdar for being an incredible blessing. 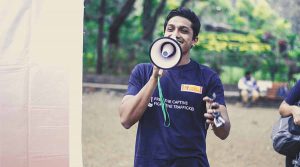 He gently reminds us that He knows how to play. He

Swipe to read WAITING ON YOUR CALLING #waiting #

Here's something we learnt about God's heart while

Through prayer, we understand His heart. Through p

SWIPE TO READ Resisting the easy road to Glory #

“I cannot believe in a God who sits back while t