Home » The side of mercy you didn’t know

What comes to your mind when you think of ‘mercy’?

We asked our readers and the responses were heartwarming.

“Love and compassion”, “forgiveness”, “Jesus with arms open wide“, “acceptance” were just a few of the responses.

Usually, these are the first thoughts that come to us when we think about mercy. There’s an overall ‘good feeling‘ that’s associated with the word.

And I’m guessing in all the cases that you can think of, the recipient felt good, free or loved.

But there’s a face of mercy that most of us don’t know.

In Genesis 19, God is about to destroy a city because its citizens were extremely wicked. But He decides to send some angels to warn a man there named Lot, so that he can escape before it happens.

The angels tell Lot and his family to get out of the city before God destroys it.

But Lot hesitates. He’s quite comfortable where he is. He doesn’t want to go. He’s settled down in that city. He has acquaintances there – neighbors, cousins, colleagues. We don’t know what he does to show his reluctance but the Bible just says that he hesitates.

And then comes my favourite part –

“When he hesitated, the men (angels) grasped his hand and the hands of his wife and his two daughters and led them safely out of the city, for the Lord was merciful to them.”

They grabbed his hand and the rest of the family and dragged them out.

Why did they do that?

Because the LORD was MERCIFUL to them.

The LORD showed His mercy to them by forcefully pulling them out of that city.

Here’s an example. Sometimes when a child needs an injection but is too restless, too frightened, and just wants to run away, they need to be held tight, almost forcefully, so that the doctor can do his job.

They need to be forcefully pinned down so that they can receive what’s best for them.

Sounds cruel? Not really, right? Because you can see the big picture in this instance.

And that’s our problem.

We don’t see that in the light of eternity, our sufferings and troubles are being used to shape us and mould us – even to save us. And that’s mercy.

Some of us are being pinned down, even violently, by the Father, so that He can perform surgery on us – so that He can remove the things within us that will kill us, and instead, give us what’s best for us.

That’s you right now. Pinned down forcefully. Confused about why it’s happening to you. Confused about what good could come out of this. And yet, He is not giving up. He’s holding you tight. Maybe even grabbing you, and dragging you out of what is not supposed to be your city, no matter how comfortable you are there.

Because He is merciful to you.

PrevPreviousCome to Me, just as you are
NextWant to be a mighty man or woman of God? Think againNext 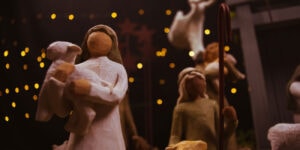